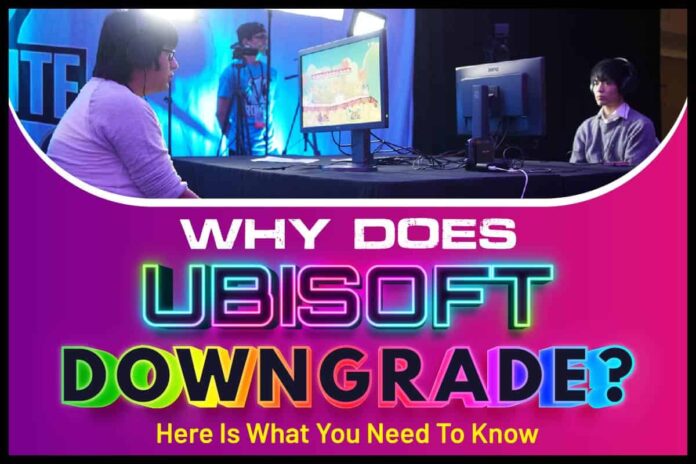 Ubisoft is a French company headquartered in Montreuil Suburb. It deals with video game development.

Some of Ubisoft’s video game franchises are Watch Dogs, Prince of Persia, Rabbids, and many more. There have been numerous complaints from gamers on Ubisoft’s habits of downgrading its games.

The Ubisoft developers have received harsh criticisms for game downgrades. It’s because the Ubisoft games are always so powerful early in development.

However, the final product is not as polished as compared to the early release. Some of the gaming software facing downgrades are Ubisoft Montreal and Watch Dogs.

It has been a target for graphically downgrading most of its games. So let’s get back to the question.

Why Does Ubisoft Downgrade?

At the start of game development, a graphical fidelity goal is set. The set graphics and such are the goals to reach by the developers. Throughout the development cycle, the game is redefined, and new changes are applied.

Even the older games used to do this, but most gamers were blissfully unaware. Unlike before, the game development times have been drastically cut.

It always took between 2-3 years on average to complete game development. Today it has been cut down to 6-10 months.

Many gamers are now demanding more insight into game development. This forces developers to show games at optimal goals in the early stages of development.

The developers build up hypes they know cannot be reached. Ubisoft has a similar occurrence. Before the release of “Watch Dogs,” the company overhyped it a lot.

This raised the expectations of many gamers to the fabled level. On release, the “Watch Dogs” was a disappointment.

It did not meet the expectations of the gamers by far. Ubisoft had to redeem itself. The only shot it had was developing a better next series of “Watch Dogs.” The “Watch Dogs 2” was superior to the previous one.

This might be because the expectations for the game were so low. So anything better than the previous “WatchDog” quickly satisfied the gamers.

This is one of the significant causes for game downgrades. According to a Ubisoft senior producer, they tried hard to avoid the issue, caused mainly by unfinished console hardware.

The “Watch Dog 2,” which was to redeem Ubisoft’s name, did not live up to the hype too. The first showing of the games was back in 2012.

Nobody knew what the next generation hardware and consoles would look like. The “Watch Dog 2” developers tried their best at the time to predict what future consoles and hardware will be.

The developers were sure the first releases were excellent and could run on a very powerful PC.

The E3 stands for Electronic Entertainment Expo. It’s the most popular trade event in the gaming industry.

The developers, publishers, and manufacturers use this platform for advertising games or related gaming content to the press.

Most gamers do not enjoy video games. The games are released in the E3 version, which is characterized by outstanding quality graphics.

However, after the actual release, most computers cannot display the games in high-quality graphics.

Ubisoft is a top-rated game development company. The company faces a lot of criticism because of frequent game downgrades.

Highlighted are some of the Ubisoft games that have received lots of criticisms.

It’s an action-adventure game developed and released by Ubisoft. Of all Ubisoft games, Watch Dogs has been the most targeted for its massive downgrade.

The game had perfect graphics and lighting effects. The trailer showed the next-level gaming.

It was a stunning simulation of America’s Chicago.

The first release of “Watch Dogs” was in 2014. It was one of the most awaited Ubisoft games. Gamers expected something great or with little difference to one advertised at E3 2012.

It was indeed a disappointment. Most of the great graphics did not make it to the final product. In addition to not having good graphics, the lighting was also missing.

The concept of the online shooting game is excellent. It’s a development of the Ubisoft Company and was released on 1st December 2015.

Its trailer was released in 2014 and got lots of love and attention. The games emphasize the destruction of the real-time environment.

The graphics, reflection, and lighting were perfect, even during the nighttime. The final game released in 2015 did not bring out the great graphics and stuff.

The game had been toned down, and this even affected the hostages’ look. From a gameplay perspective, the environmental destruction part was quite incredible.

It’s one of Ubisoft’s recent releases. The game was published in 2016 and seemed like a downgrade.

The graphics of the game were undoubtedly different. The trailer of the division was released in E3, 2014.

The graphics were great and had fantastic dynamic scenes. It was characterized by snow that melted, and the textures were sharp.

However, the latest release was a downgrade and did not have sharp textures as promised in the trailer.

Most things had been toned down, such as the snow effect, car damage, and many more. The feel of New York City shown in the earlier version has drastically changed.

Despite the visual downgrades by Ubisoft, the global illumination and lighting were perfect. Even better than what was shown in the trailer.

However, most gamers did love the game and think it was pretty impressive compared to others.

“The Far Cry 3” was released in 2012. It’s a first-person shooter game developed by Ubisoft. The game trailer was released at E3 2011.

The graphics were perfect and showcased all the background details. The underwater scenes were significant and impressive to most gamers.

However, lots of features were missing in the final game. The minor details like underwater scenes were missing, and the excellent background and animation were also missing.

The one thing that made Far Cry 3 stand out was the impressive storyline. The graphics weren’t as bad. Generally, it was an excellent game, and with the addition of minor details, it would have been one of the best Ubisoft inventions.

The PlayStation 4 and 5 are among the best consoles available. However, certain games available are not great.

Bad graphics and controls characterize them. If you are a PlayStation owner, you have to select games you add to your library.

There are several disappointing games you have to avoid to save some coins. In this article, we’re sharing some of the worst games available. The basis of the ratings is dependent on several factors.

No developer has the intention of creating something shitty. I’m sure the Afro Samurai 2 developers were high on hopes.

They invested their precious time and efforts in developing the game with the hope of creating a masterpiece. It did not go according to their liking because of various explainable factors.

The game does not hold up to many levels and isn’t competitive. It’s a recent PlayStation 4, but its graphics equals those of the PlayStation 2 games.

If you are still a lover of the PlayStation 2, the Afro Samurai 2 will be perfect for you. Its voicing acts, mechanics, and fighting scenes are pretty bad. The game’s idea is super great, but it should not even be on the PlayStation 4 list.

The idea behind the road range is excellent. Combining motorcycles and combat is superb. Some games like GTA V have perfectly actualized the idea.

The road rage has done it so poorly, and it’s more comedic. The worst thing about road rage is poor control.

This is the one thing that bores most gamers. How on earth can one control the players if the controls are poor?

In addition, the game has awful graphics. You may think the game was released eleven years ago. Yet it was released recently in 2017. The poor graphics have made gamers criticize the game.

Ubisoft is a famous company that has produced and launched hundreds of games. The company has been in the limelight because of game downgrades.

However, the company has occasionally defended itself. The company claims that the downgrade occurs because of console hardware limitations.

This is true, but they should find a quick and possible solution to this. Or else they might end up losing more gamers.

Next articleCan I Plug My Fire Stick Into My Computer? Understanding The Technicalities