Why Did X1 Disband? The Truth Revealed 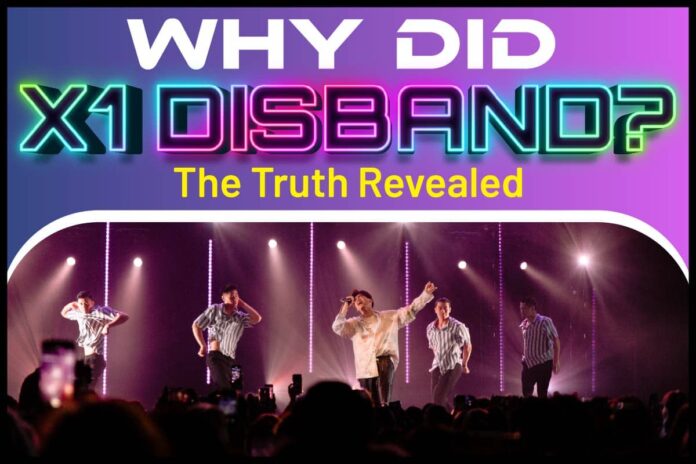 X1 is a South Korean band consisting of eleven male members. The band is a product of a reality TV show by Mnet, Produce X101.

The band came together in 2019 and released their first single, “flash.” The band formed by the CJ ENM gained popularity, and their five-year contract was the talk of the town.

Unfortunately, the group got disbanded, leaving those who have been keeping tabs on them since inception, devastated.

So, let’s unravel the mystery behind the group’s disbandment.

Why did x1 disband?

The group disbanded because their different management couldn’t agree about their future as a group.

This disagreement came right after the organizers of Mnet produced X 101 were under investigation for rigging votes and some illegal activities related to the show.

The band disbanded on the 6th of January 2020. And that’s almost five months after their first debut with the single “flash,.”

This post carries other valuable information on the X1 band. So, keep reading to learn more!

Meet The Members Of The X1 Band

Firstly, the band had eleven members, and they are:

The Origin Of The X1 Band

X1 came together as a result of the Mnet survival competition series Produce X 101. The series aired from the 3rd of May- the 19th of July, 2019.

The final ten trainees got chosen from among the remaining 20 trainees in the show’s last week. They were all selected out of an initial 101 who started the journey.

The final member (who made the X1 band eleven members) known as the rank X member, was chosen from among the remaining trainees based on the most votes. The revealing of the members happened in the final episode, which aired live on the 19th of July 2019.

The members weren’t new to the music industry of the x1 had previously worked in the music industry. Cho Seung-youn made his debut as a member of Uniq and WOODZ in 2014 and 2016, respectively. Kim Woo-Seok made his UP10TION debut in September 2015 as Wooshin.

The team’s contract was for five years. The first half was an exclusive deal and the second half being a non-exclusive deal. After the first part of their contract expires, they can return to co-promote with their original agencies.

How Did The Vote Manipulation Affect Their Debut?

Following allegations of vote-rigging, the premiere of Produce X 101 went on as planned. Several brands either canceled or postponed their endorsement deals with X1. Some of the contestants’ agencies refused to sign until Produce X101 resolved the allegations. Despite this, X1’s debut went on without a hitch.

The X1 Flash’s reality show X1 Flash, debuted on Mnet on the 22nd of August 2019. The group debuted on the 27th of August 2019, with a show at Gocheok SkyDome. On the 1st of August, x1 announced that their debut album, Emergency: Quantum Leap, would be titled “Flash.”

Produce X 101 had several public appearances canceled, and Mnet announced that the plans for the group’s promotion were on hold. This announcement was after Ahn Joon-young got arrested, and he admitted to the crime. CJ ENM later announced that members and their agencies were in discussions on their future.

The agencies representing the X1 members held a secret vote to determine the group’s future in January 2020.

Several of the members’ agencies rejected the group’s final song. Before they split up in 2020, CJ ENM had planned to release a winter song as a farewell song. But many of the member’s agencies voted against it.

Their fans didn’t take the disbandment of the boy band well. Following the disbandment, their fans staged a three-hour protest against CJ ENM. They believed that the group’s decision to disband was unjust, and they desired to see them perform again. According to Soompi, about 1,000 fans participated in the protest.

Was The X1 Worth The Hype?

There is no doubt they got a lot of love. The love they got could have been because people loved their music, their journey, or them as individuals or all three. Whatever it was, they didn’t disappoint their fans, at least in the few months they were together.

Quantum Leap, X1’s debut album, sold over 500,000 physical copies in its first week. “Flash,” the group’s debut and only music video, received over 100 million views on YouTube in just 334 days after they uploaded it. On the 26th of July 2020, X1 made its debut on the Billboard charts.

Where Are The Members Of The X1 Band Now?

After the disbandment, the members of the X1 followed different paths. Here is what they have been up to so far:

The leader of the X1 went back to his old group before joining the X1. He got accepted back in the Victon, and he was in their recent music release, “howling.”

Kim Woo-Seok modeled for Clio after the X1 disbanded. He tried out acting as well, getting the male lead role in a Korean web drama.

There have been talks about him releasing music solo, but nothing concrete has come out of it. He also hasn’t said anything about going to his previous group UP10TION.

Jun-ho did a photoshoot with singles. There are speculations about him joining the W project 4. The W project four consists of trainees from Woolin entertainment. Many of the trainees were from the produce X 101 show. Because of this, people see a connection that might work for Jun-ho.

He has also done a shoot with singles. He has also been busy chatting with his fans on live chats. There have been no reports on whether he would be going solo or forming a group.

Have you ever heard of the H & D band? Well, the crew has two members: Lee Han-gyul and Nam Do-hyon. The two members of the X1 didn’t part ways after they got disbanded because they belong to the same agency.

Yohan has been very active. He did a photoshoot with Star1.

Yohan will also play the male lead in the upcoming drama “School 2020”.

However, due to some controversies, the drama’s airing date is currently unknown. It is presently unknown what musical direction Yohan will take.

Eunsang, like many of the other members, participated in a photoshoot for The Star. Eunsang has also performed, “Seorita” choreography.

There have been speculations that he’ll make his debut with the other Brand New Music trainees who took part in Produce X 101.

Minhee and Hyeongjun are both signed to the same agency to make their debuts in the same group. The two will debut in CRAVITY: a band made up of many Produce X 101 contestants.

Seung-Youn has been active on social media since he left the group. He released a dance video after the disbandment. The video did considerably well. He also did a photoshoot with 1st look.

The disbandment of the x1 was painful for their growing fanbase because they had high expectations for the group, including what they could achieve.

The eleven members all seem to be doing well in their different endeavors. Although the chances of coming back together are slim, there are people out there hoping it would happen. And yes, we would love to see them back together.

Shocking! See How To Find A Secret Group On Facebook

Previous articleIs 2160P Worth It? Is 4k Overrated?
Next articleDoes AppleCare Cover Cracked Screen? Repair And Replacement Of iPhone Screen