Is My Switch Hackable? Find The Best Answer 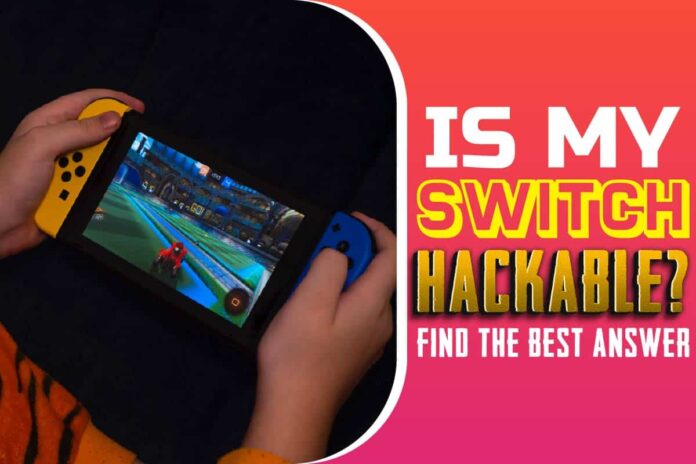 The Nintendo Switch has been popular since its release in 2017. With over 84 million units already sold, the Switch stands among the best-selling game consoles of all time.

The Switch may be one of the most successful game consoles of all time, but there have been concerns about its security.

Gamers may be required to create user accounts linked to their Switch to access certain features. This circumstance raises questions about privacy and security.

Although Nintendo claims the Switch is very secure, some users have reported breaches to their accounts.

So, is your Switch hackable?

Is my Switch hackable?

Yes, your Switch is hackable. The Nintendo Switch may be a great gaming console, but it isn’t immune to hacking.

Nintendo is investigating complaints about security breaches by Switch users.

As recently as April, Nintendo confirmed reports of breaches to Nintendo Switch accounts by game blogger Paul Tassi. In that report, there had been unauthorized logins to more than 160,000 accounts.

Nintendo, however, put the actual figure at over 300,000 accounts.

Can you know if someone has hacked your Switch account?

How To Find Out If Someone Has Hacked Your Switch Account

It is possible to detect a potential breach of your Switch account. Nintendo provides information on your login history and related activities.

If you find random countries you haven’t been to in your login history, it means there has been unauthorized access to your Nintendo switch account. Changing your password is necessary at this time.

So how do you protect your Switch from hackers?

How To Protect Nintendo Switch From Hackers

Making your Nintendo Switch account as difficult as possible for hackers is a good way to go.

Nintendo, like other companies, offers a two-step verification to help users protect their online accounts.

Enabling the Nintendo two-step verification on your Switch account would ensure your account remains unsusceptible to hackers.

To enable the two-step verification, follow the steps outlined below

On clicking, you will receive a verification code to the email connected to your Switch account requesting that you confirm your email.

Once your email is confirmed, two-step verification becomes enabled in your Nintendo Switch account.

Features Of The Switch

The Switch is a hybrid console. So it can be used either as a home console or portable device.

The Switch features a wireless joystick with standard buttons and analog sticks that supports handheld play style when attached to both sides of the console.

The Nintendo Switch supports online gaming with other consoles when connected to the internet.

The Switch allows users to view their gaming stats whenever they log in to their Switch accounts. These stats will enable users to find out exactly how much time they spend playing particular games.

The Switch also possesses a screenshot button similar to that of Sony’s Playstation4. This button is the square button on the bottom left of the joystick controller.

The Switch also has the dark mode option for users who prefer dimmer quality.

Browsing the internet via the Switch is possible. Connecting to Wi-Fi enables users to access Google and other web pages.

You can also set your Switch to match your TV settings. Matching the Switch control with a TV allows users to control their TV from the game console. This setting can be turned on or off.

The Switch games are available on e-shops both as physical flash-based ROM cartridges and digital distribution formats.

The History Of The Switch

Nintendo first conceived the Switch concept after the release of the WII U in 2012.

In an exclusive interview, the President of Nintendo America stated that the company was developing the Switch to provide a new way to play that would have a more impact than the WII U.

The console would provide gamers with the option to play at home and on the go.

He also stated that the console would help other game developers envisage and create new games.

The failure in sales of the WII U paved the way for the development of the Switch.

Nintendo announced the development of the Switch on 7th March 2015 after a partnership agreement with DeNa.

Nintendo code-named Switch as the “NX,” describing it as a brand new concept.

Nintendo announced plans to release the NX worldwide during an investors meeting in April 2016.

Although the company did not unveil the NX’s hardware, it announced that the NX would support WII U games like the Legend of Zelda and Breath of the Wild.

In the months that followed, rumors regarding the nature of the Switch console began to surface, including the use of the Nvidia Tegra hardware.

The company also released a trailer that demonstrated the nature of the hardware as a hybrid device.

At a press event in Tokyo on 13th January 2017, Nintendo unveiled the technical details of Switch, including the launch date and price.

Nintendo officially released the Switch in Japan and English-speaking and Western markets on 3rd March 2017.

A complete Switch comprised a console, left and suitable controllers, dock accompanying straps, an alternating current adapter, a grip, and an HDMI cable.

The fear that a higher price would harm sales prompted Nintendo not to include additional hardware.

The global launch of the Nintendo Switch did not include parts of Asia, India, and mainland China.

In April 2019, Nintendo announced a partnership with Tencent.

This partnership enabled Nintendo to gain the necessary approvals to release the Switch in China.

The Switch Lite, a handheld focused revision of the system, was released on 20th September 2019.

A revised high-end model featuring an OLED screen will be due for release in October 2021.

The Nintendo Switch console system is presently available in all regions around the globe.

How was the Switch received after its release?

Reception Of The Switch

As of May 2020, the Nintendo Switch had sold over 55 million consoles across the globe.

By November 2020, the Switch became the second best-selling Nintendo home console game, only behind the WII U, with over 66 million units sold.

However, the Nintendo joy-cons have an issue known as the joy-con drift. This problem is due to accumulated dust inside the controller.

This defect makes the Switch register movements on the joystick even when the user has not made any contact.

In July 2019, a district court for the Western District of Washington received a lawsuit against Nintendo concerning the defects in the console’s joy-con controllers.

The suit alleged that Nintendo knew that the console had defects. The defect caused the console to register movements without any contact with the joystick.

The suit also claimed that although Nintendo was aware of this defect, they chose not to disclose it and refused routine repairs of the joysticks without charge.

This legal action was followed by leaking an internal memo to Nintendo customer service employees three days after filing a suit. In the message, Nintendo instructed employees to repair drifting controllers for free.

However, the lawsuits continued, and following the release of the Nintendo Switch Lite, the claimants added new complaints related to the Lite.

The court refused Nintendo’s plea to dismiss the case, sending it into arbitration.

Nintendo in December 2019 successfully obtained an injunction against a distributor of a hack made by “team Xecuter.”

Subsequently, in 2020, the company filed a lawsuit against resellers of team Xecuter products. Nintendo settled one of its cases with resellers for $2 million.

The Switch may be one of the most successful game consoles of all time, but there have been concerns about its security.

There have been reports about compromise to Switch user accounts.

The Nintendo Switch may be a great gaming console, but it isn’t immune to hacking.

You can check if your account has been compromised by checking your login history in your account information.

To protect your Switch from hackers, enable two-step verification in your account settings.

The Switch also has a variant called the Switch Lite. Both are now available in all regions of the world.

See How To Get Group Funds Without Breaking A Sweat

Check Out These Easy Tips On How To Advertise Discord Servers

If you're looking for the best Thermaltake cases, then look no further. In this blog post, we will discuss 10...
Read

What is the best and biggest case for your PC? A computer's hardware configuration largely determines how it will perform,...
Read

Are you looking for the best console PC case to store and protect your gaming PC? This article will provide...
Read

If you're looking for the best Thermaltake cases, then look no further. In this blog post, we will discuss 10...
Advertisment

What is the best and biggest case for your PC? A computer's hardware configuration largely determines how it will perform, which means that you...

Are you looking for the best console PC case to store and protect your gaming PC? This article will provide a review of some...