Check Out How To Use Action Replay 3DS 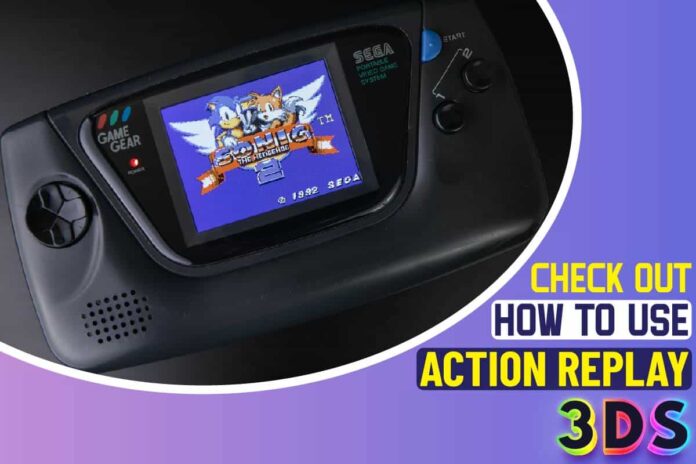 The Action Replay brand refers to a range of cheating devices made by Datel.

Action Replay works in gaming consoles to alter gameplay by reducing or increasing difficulty or modifying sections of a game.

Action Replay brings a new dimension to the gaming experience and is available for different game consoles – Xbox, Gameboy, PlayStation and Nintendo.

Newer versions can save gameplay in addition to providing hack codes.

Nintendo 3DS users have often inquired on how to use Action Replay on their game consoles.

So, how do you use action replay on 3DS games?

How To Use Action Replay On 3DS

Follow the steps below to use action replay on 3DS.

There are several versions of Action Replay for Nintendo DS games. However, only the current DSi version will work on 3DS.

So, how do you update Action Replay to the current version?

How To Update Action Replay

Use the steps below to update the action replay to the current version.

You can now unplug Action Replay from your computer and insert it into your 3DS.

Action replay is the brand name for a series of cheating devices produced by Datel.

Action Replay works in selected game consoles to alter their in-game events by increasing or reducing the difficulty.

Action Replay first created cartridges on non-Nintendo consoles, with disk operations running ten times faster than the normal speed. The first game console that could work with Action Replay was the Commodore 64.

Action Replay cartridges could also save the game at any point. On rebooting, players could resume their games from where they had stopped.

Listed below are some game consoles and the Action Replay versions released for them.

The Action Replay Max Duo, in addition to its hacking function, features a second slot for power saves for Nintendo DS games.

Both versions provide code for hacking games. They also come with a Freeloader that bypasses regional lockouts on consoles, allowing them to play imported games.

In addition to the hack and bypass features, the Action Replay Max also comes with a memory card.

The original Action Replay version for GameCube could not save games. It could only display codes.

The first version of the Action Replay – the DS1 – came as a simple card with no slot.

To use it, you will first have to boot up the system and then select your game and its codes. When you receive a prompt, you should hot-swap your gamecard to start playing.

An extra slot that can accommodate game cartridges became available on the DS2 and DSi versions of Action Replay.

The DS1 and DS2 versions of Action Replay will not work on DSi and 3DS game consoles. The consoles have newer firmware that prevents access from unauthorized devices.

However, newer versions of Action Replay will work on 3DS. These new versions come with upgraded firmware that supports previously unsupported games like Pokemon Black & White.

It was later disabled after a firmware update no longer allowed it to work.

There is a newer version called the Wii Action Replay, and it is still functional. It may not be disabled anyway, as its release came shortly before the launch of the Wii U.

The main feature of the Action Replay is its hack function.

With Action Replay, players can unlock items or abilities that are usually difficult to obtain.

Action Replay also allows players to save games at any point in time. The saved game can be loaded from that point even if the game does not naturally support saving.

About The Nintendo 3DS

The 3DS is a handheld game console produced by Nintendo. The company first announced the  3DS in March 2010.

Although unveiled as the successor to the Nintendo DS, the 3DS is compatible with older DS video games. 3DS users can download and play games released on older Nintendo consoles.

The main competitor to the 3DS is Sony’s PlayStation, both of which are eighth-generation consoles.

The 3DS can display stereoscopic 3D effects without the use of 3D glasses or any other accessories.

The Nintendo 3DS supports features such as the street pass and spot pass tag.

The 3DS comes with pre-installed applications like the Nintendo e-Shop, an internet browser, Netflix, Hulu Plus and YouTube.

History Of The Nintendo 3DS

It began in 2009 with speculations about the emergence of a successor for the Nintendo DS.

At that time, Nintendo was already a major player in the production of handheld gaming devices.

In October 2009, news broke out that Nintendo had decided to use Nvidia – a graphic processing unit (GPU) developer – to develop hardware for their next-generation game consoles.

Finally, on the 23rd of March 2010, Nintendo officially announced the 3DS handheld console as the successor to the Nintendo DS.

In April 2010, pictures emerged of a probable prototype of the 3DS, including its internal components.

Analysis of the 3DS pictures proved genuine, as only components peculiar to the Nintendo DS were present.

Nintendo unveiled the 3DS system during a conference on the 15th of June, 2010.

Kid Icarus: Uprising was the Nintendo game to debut on the 3DS. Other third-party games initially released for the 3DS were Final Fantasy, Resident Evil and Metal Gear Solid 3.

In March 2011, the worldwide release of the Nintendo 3DS began.

Six months later, Nintendo slashed the price of the 3DS to $169 from $249 in North America due to low sales.

Nintendo compensated customers who had bought the consoles at the initial price with free Nintendo and Gameboy Advances games.

This strategy appeared to work as the 3DS became one of Nintendo’s most successful handheld consoles two years after its release.

Although the 3DS would no longer sell as much as it did in its early years, pundits still consider it a success.

Rumors of the coming of a larger model of the Nintendo 3DS arose in 2012. Nintendo, however, rebuffed these rumors and refused to make further comments on the subject.

On the 21st of June, 2012, Nintendo announced a larger screen model of the 3DS during a company presentation.

Nine years later, on the 16th of September 2010, Nintendo officially announced that it discontinued the 3DS game console production.

Before the end of its lifespan, the Nintendo 3DS reportedly sold more than 75 million units, becoming one of the world’s best-selling game consoles ever produced.

Action Replay is a brand name for a series of cheating devices made by Datel.

Action Replay works in gaming consoles to alter gameplay by reducing or increasing difficulty or modifying sections of a game.

Next, insert the game you want to play and reboot the game console.

Action Replay will automatically recognize the game card when you insert it and produce the game’s code list.

There are several versions of Action Replay for Nintendo DS games. However, only the current DSi version will work on 3DS.

Previous articleCan I Play Roblox On Wii U: A Must-Read For Avid Gamers
Next articleDetails On How To Hold An N64 Controller