Details On How To Hold An N64 Controller 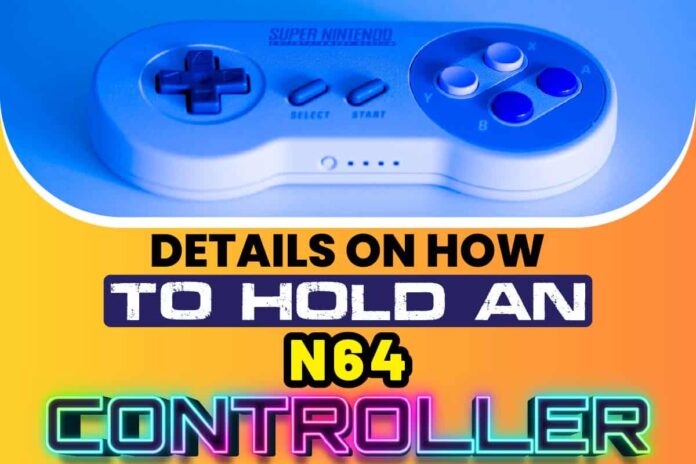 People love games for different reasons. For some, it may be the ability to immerse oneself in a perfect reality. For others, it could be an opportunity to escape boredom.

Whichever way you look at it, the gaming industry thrives by selling experiences to its users. These experiences begin with game controls. The link between the games and the user is the game controller.

This post explains how you can hold an N64 controller and more. Read on!

How To Hold An N64 Controller

You can hold the N64 controller in three different ways.

Use the outer grips:

Here, hold the left and right sides of the controller while ignoring the middle arm. This grip is more functional for 2-D games.

It allows you to access the direction pad and the buttons on the controller’s shoulder – the ‘L’ and ‘R’ buttons.

This grip works by holding the right-hand grip and the middle hand grip, giving access to the button on the right shoulder, ‘R.’

This pattern works best for 3-D games. With this grip, you can access the analog key and z-trigger.

Left side and middle grip:

In this pattern, you hold the left side and the middle arm. This way, you access the directional pad, the analog key, left-hand shoulder ‘L’ key, and Z-trigger.

There are few applications for this grip.

This extra application was not intended in the original design but it has proven useful in many first-person shooter games.

You can do this by holding two pads at the middle arm to control the analog keys.

The N64 controller design is certainly unconventional. It differs from other controllers that usually have two grip positions.

This arm contains the left-hand shoulder button ‘L’ and the direction keys.

This arm contains the analog key and the trigger key behind it.

This arm contains the A and B buttons which are bigger as they see more “action.”

It also houses the C buttons. These are four small yellow buttons.

The unconventional design also meant that you could not effectively use the pad with a single grip.

To access different functionalities, players have to move their hands completely. Anything else would be quite uncomfortable for gaming.

Usually, this shouldn’t pose much of an issue as the user has to stick with a particular grip for the game style.

PlayStation, a major competitor, maintained the two-arm grip. They were also able to fit in two analog keys within reaching distance in the middle.

Nintendo would follow the trend in successive versions of their controller.

Nintendo created this design for handling with both hands. They usually contain direction buttons or controls and action buttons.

Gamepads allow users to control the action with their fingers. Action keys are usually placed on the right, while the direction keys are on the left.

Gamepads are the most commonly used primary input device for consoles today. They are so user-friendly. Many gamers also use them on mobile and personal computers.

Note that the N64 controller is a gamepad and the first to include an analog key that you can use with just a thumb.

Paddles were the first analog controllers. They contained a wheel mechanism used for directional control of the character.

The paddle also usually contained some action buttons. The more the wheel moves away from its neutral position, the faster the character moves.

Paddles are no longer a fan favorite and are usually limited to games that suit the controls.

As the name describes, the joystick consists of a stick big enough to be held by hand. It also usually has action keys by the side on the base.

This handheld stick is similar to analog directional keys in that you can move it around to direct characters.

In most cases, you can move the joystick only in two ways in most use cases. That is up or down, and it is quite popular for games that involve flight simulations.

The steering wheel is the obvious choice amongst arcade race car games. This type of controller allows users to feel like they are driving a real car.

It is quite similar to a paddle in that the wheel determines the direction of the car. The more you move it away from the neutral position, the more it moves.

There is something called the forced feedback mechanism. This mechanism makes the animation response to the wheel more realistic depending on the game in question.

The steering wheel may come with a set of pedals. These pedals mimic brake and accelerator pedals, further adding to the realism and the experience.

It can provide quite the complete experiences for speed lovers in addition to the nascent virtual reality technology.

This controller closely resembles the control yoke found on airplanes. It is similar to steering. Unlike the steering, it can move back and forth as well as rotate.

Some yokes may come with buttons around to enhance the cockpit simulation experience.

Pedals can perform different functions depending on the design and the type of steering they have.

They are useful in automobile, plane, and ship simulations. Technology is continually improving to make this experience more realistic.

The mouse and keyboard are designed for personal computer input, initially with only written text in mind.

The keyboard contains the direction and action keys in most instances and the mouse for aiming.

Understandably, this isn’t the most comfortable setup. Consoles exist that support mouse and keyboard input.

Some gaming companies have also recognized that some users favor this input method. As such, they have created keyboards specifically created for games.

It is quite popular for sports games like boxing and tennis.

Here the input is made directly through the console or device screen. We saw this in consoles like the Nintendo DS.

It is also the conventional input method for most mobile gamers who do not feel the need to buy compatible wireless gamepads.

How To Clean N64 Controller

It is essential to maintain our gaming equipment for the best performance and to ensure durability.

Get all required materials:

They include the following:

Open up the controller and remove important parts:

Disconnect the device from any power source.

You will have to unscrew nine screws in total. Seven are in plain view at the back, while two are beside the accessory unit.

Make sure you have unscrewed all nine to avoid accidentally breaking the controller by forceful removal.

After unscrewing, remove the back shell gently to make sure nothing breaks.

Push the z trigger in and move it up to remove. Check if the inner part of the back shell also requires cleaning.

These screws are three in number. Observe carefully, so you won’t get the black screws unscrewed.

Use cotton balls and rubbing alcohol to clean contact sheets.

You can clean the buttons using different ways.

Case 1 – Here, fill the zip lock bag with rubbing alcohol. Drop the buttons in the bag and shake for a bit. Finally, you dry clean the result and clean any residual stain.

Case 2 – Here, you clean the buttons on every side with rubbing alcohol and your cotton bud.

When done, allow it to dry.

Clean the board and shell:

Try as much as possible to be gentle. Use a cotton bud or swab dipped in alcohol. Watch out for the wiring.

Try to reassemble the controller by reversing steps in 5 and 2 of this section.

The N64 controller is the controller for the Nintendo 64 game console.

You can hold the controller in at least three different ways. Each way of holding it optimizes performance for a particular game design.

The N64 design is unique as it is the only one that includes three grip positions. It was also one of the first to include the analog key.

Game controllers are of various types, shapes, and sizes.

Previous articleCheck Out How To Use Action Replay 3DS
Next articleCan You Download 3DS Games On An SD Card? You Need To Read This