This Core 2 Duo Vs i5 Comparison Might Surprise You! 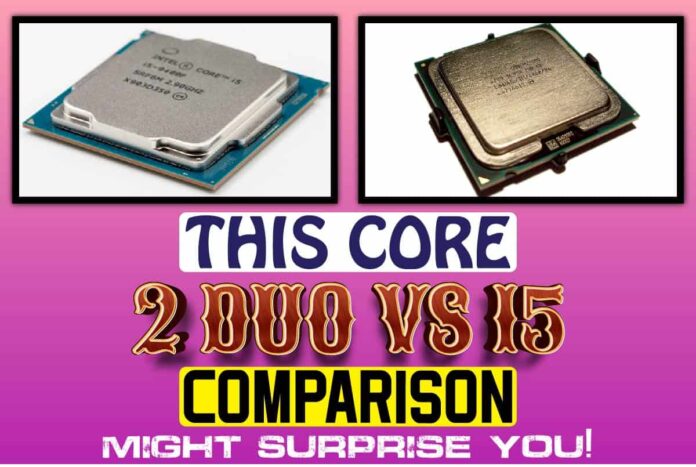 When it comes to building a PC or purchasing a laptop, some of us really do not have the money to go balls to the walls.

Even though i7 and i9 are going to offer spectacular overall performance, they are not really that budget-friendly. Well, that is where the core i5 and Core 2 Duo lineup steps in.

However, as you are reading this article, you want to get the most out of your money, right? And that indicates that you would be highly interested in the topic of core 2 duo vs i5. Well, You have come to the right place!

We have plenty of benchmarks to point out the things that make one better than the other.

The Mighty Core i5

Having a position that is between the i3 and i7, the i5 is the sweet spot for the content creators and gamers looking for the extra oomph but do not want to spend that much money on a CPU.

And this was the only lineup that offered K-version before the i7, at least up until the 7th generation.

In terms of performance, the i5 surely lives up to its position. It will offer better performance than most of the i3 but will not be able to match up with i7. And when it comes to handling multiple processes, it will surely perform better than the i3 in almost all of the scenarios.

However, there is a catch. There are plenty of different generations of processors. And with each generation, the CPUs see a good bump in the case of performance. So, if you were to compare a 10th gen i3 with a 1st gen i5, the i3 will surely take the crown.

Nevertheless, if you compare all of the CPUs in the same generation, the i5 will be better than the i3 in all aspects. But how does it perform better? Well, there are a lot of things that make it capable of offering the amount of performance it can provide.

Firstly, the cores. Now, many might think that the number 5 indicates that there are five cores. Well, you will surely get disappointed when we tell you that some of the laptop variants of the Core i5 might even have two cores. But usually, a core i5 will come with four cores. And the higher-end models will have six of them.

Secondly, there is a thing about cache. The more the cache, the better the CPU is going to perform. Also, hyperthreading capability is another thing that indicates the performance of the CPUs. But all of the latest models of core i5 will come boasting that capability. So, there will be no need to worry about that with them.

As you might know by now, the CPUs are bound to get hot. And the hotter it will get, the more cooling it will demand. If it does not get cooled down faster, you will experience performance throttle. A throttling CPU is basically going to lower its power consumption to compensate for the heat.

Now, when it comes to lowering the power consumption, the less the CPU consumes power, the less the performance it will be able to output. Nonetheless, you would not really need a beefy cooler to keep the i5 running optimally. For the desktop, the included air cooler will be more than okay.

However, if you purchase a K-version i5 CPU and plan to overclock it, you need to upgrade. Again, it will not require a beefy water cooling system in that case, either. That being said, if you are wondering what the K series states, it basically states that you can tinker around with the parameters of the CPU.

After properly configuring the parameters, you would be able to pump more juice out of it. But you must know what you are actually doing, or else you might just damage the internals and make the processor non-functional.

In the topic of features, the i5 processors are generally up to date. But that will only be applicable if you are getting something from the latest generation. In other words, it will not lack that many features when compared to the higher CPU models of that same generation.

So, the i5s do not really produce that much heat, which states one big thing. Can you guess what that is? Well, it will not consume that much power either. In fact, most of the laptops with core i5 will be able to run with providing full performance with a power brick that is about 90 to 100 watts.

On that note, when it comes to desktops, if you do not have a beefy GPU, you would be all good with a proper 500 watts processor. In a nutshell, these processors are generally power efficient and will not consume that much amount of power for the performance that they can offer.

You are probably fairly familiar with the Core lineup. There is i3, i5, i7, and now, i9. But, do you know what started it all? The Core 2 Duo! Yes! This is what initiated the whole core lineup.

Intel brought out this process back in 2006, and sadly, it has been discontinued at this point. The processor from this lineup came out before 2012. However, even though intel is not manufacturing and providing it to the market anymore, there are plenty of second-hand or used models floating around.

In terms of performance, the Core 2 Duo is not going to break any records. In fact, it might not offer that much amount of performance to get into the modern performance chart. The processor is pretty much outdated and does not really hold the ability to offer the oomph that most of the demanding apps and games require.

However, the performance that they offer is more than enough to get an office PC or laptop running. Pair the system up with an SSD, and you will have something that will be highly capable of running web browsers, different media players, and less demanding games and apps.

That being said, unlike the core I series, there is no K version of the lineup. But does that mean that you will not be able to overclock it? Well, the good thing about the old generation CPUs is that they can be tampered around pretty easily. All you will require is some tinkering knowledge and the right motherboard.

On that note, as the name suggests, these processors are going to have two cores only. And nowadays, most of the apps, even the less-demanding ones, are going to require at least four cores. But that does not mean that you will not be able to run them. It will be possible to run them, but the experience will not be that smooth.

Well, it is out; the Core 2 Duo will not offer a smooth overall experience. But do you where it really shines? In terms of price! Yes, we know that it is discontinued! That means that there are plenty of used models out in the market.

If you can search at the right place, with the right amount of luck, you can get one that will be well under $30. Yes, thirty bucks! Some will even be around $20 to $25. And this price point is going to open up plenty of doors for the people that have the lowest amount of budget to build a PC.

Do not worry; we did not forget about the laptops. There are plenty of used core 2 duo laptops around as well. Those will be well in the grasp of most people in terms of cost.

However, you will struggle a lot if you want to purchase a brand new laptop that has core 2 Duo. The same thing goes for the desktop CPU too. And the reason behind this is that Intel has officially discontinued the lineup. It did not see any new generation after 2012.

Because of having only two cores, the core 2 duo will not produce that much heat. It will be pretty easy to cool it off. Regular air coolers will work like wonders. And watercoolers are simply going to be overkill for this CPU, even when you overclock it.

At this point, you can probably guess what we are going to say regarding the power consumption of the processor. Yes, it does not consume that much power. And yes, you will be pretty much good with a 300 watts power supply if you do not plan to run it along with a graphics card. Even 250 watts is going to be fine.

All in all, the main takeaway from the topic of core 2 duo vs i5 is that core 2 duo is not better than the i5. Even the older models of core i5 will be better to some degree when compared to the latest version of the core 2 duo.

However, if your budget is extremely tight and you do not plan to do anything that is resource extensive on your computer, you can still opt for the core 2 duos. They are pretty cheap and highly accessible in the second-hand market.

This Core 2 Duo Vs i5 Comparison Might Surprise You!

Previous articleWhere Is Manage Content And Devices On Kindle Fire? The Ultimate Guide Of Using Kindle
Next articleCan You Play 3DS Games On 2DS? Find Out