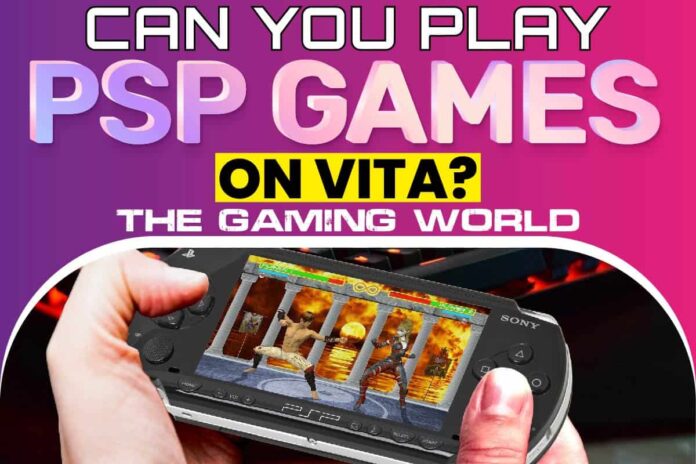 Sony released these two unique gaming consoles in 2004 and 2011, respectively. The production PSP and PSVita were discontinued in 2014 and 2019, respectively.

However, I can say that the PSP and PSVita had paltry sales. Regardless many people did love these gaming consoles because of their great pieces of hardware.

The handheld consoles were a great invention but were just released at the wrong time. The PSP and PSVita could be a great thing if not for the smartphone and smartphone gaming.

Plus, its software library had some limitations. The PSP and PS Vita do have many similarities. Besides just the design, let’s find out if one can play the PSP games on PSVita.

Can You Play PSP Games On Vita

Yes, with the PSVita, you can play the digitally downloaded PSP video games. But you cannot play games on PSP discs on the PSVita because it does not have slots for the PSP discs.

Sony did release a list of all the PlayStation Mini and PSP games that are compatible with the PS Vita. You can now download any 275 available PSP and PlayStation Mini games and play them using the PSVita.

It is a handheld gaming console that first launched in 2004, and it did manage to go up against the then-popular Nintendo 3DS.

Unlike the Nintendo 3DS and other handheld consoles, the PSP approach was more of multimedia. With the PSP, you can launch your favorite games.

Earlier you could also watch movies that were available in the UMD cartridges. The inventions of the smartphone and Netflix did kick this out.

However, the PSP also had its exclusives, and these were its outstanding games. I’m confident the games did help the PSP to stand out from other handheld consoles.

Best PSP Games Of All Time

Now that you know it’s possible to play PSP Games on Vita, why not go for the greatest PSP games of all time.

The PSP has several games that will offer you plenty to enjoy. Here is a compilation of the best five PSP games of all time. The great thing is that most of them are online and downloadable.

The release of Lumines is more than a decade, and I can assure you this game is timeless. It’s a puzzle game that gets better every round.

The game has excellent music and light, making each round exciting and exciting than the last.

The Lumines game is about turning blocks into art. It’s just a great game for any occasion, like when traveling, on vacation, etc.

However, the game has had sequels on Android, PSVita, and iOS, but the original one launched in PSP is still the best.

Gaming Metal Gear Solid in PSP has a different and unique feel. In this game, you have a lot to do, from creating armies and training them.

The game will keep you rapt in at least thirty hours. The great thing about this game is that it’s multiplayer enabled.

This is one of the elements that make this game enjoyable. You can play with or challenge your friends or even family members.

3. The God of War Series: Ghost of Sparta

Every gamer is aware of God of War. There are several series under the God of War. The earlier series, known as Chains of Olympus, was the talk of the town.

It had a great storyline and good graphics and was the love of most gamers. To sum it up, God of War: Chains of Olympus was an impressive piece of achievement.

However, the release of God of War: Ghost of Sparta changed all this. It surpassed Chains of Olympus by far. It’s because the Ghost of Sparta has an excellent adventure that is gorgeous and slick.

So if you are an enthusiast of the God of War series and own a PSP or a PS Vita, then I vouch for the Ghost of Sparta for you.

I know that it cannot compete at the same scale as its console siblings like PS3, PS4, and PS5, but it comes damn close. The game is about a Greek myth and has a great storyline.

If you are a serious gamer, I’m sure you know about Jak and Daxter series. It was one of the most popular PlayStation 2 games.

The Jak and Daxter series was a development of the Daxter PSP game. In the adventurous game, Daxter tries to save his closest buddy Jak from Baron Praxis.

If you own the PSP and PS Vita and you’ve never played Daxter, then shame on you. The graphics and gameplay of Daxter were so great on the portable console.

It’s still mega impressive today, and I still vouch for this game for anyone who loves action-adventure games. It has a great storyline, plus the drama, action, boss fights, and laughs make it unique.

The great thing is that the game has a multiplayer option. You can share the fun with your friends and family.

When talking about the PlayStation Portable exclusive games, the Patapon 3 is a must mention. The game has its unique juice.

The music in the game is excellent and does have great graphics. Most PSP enthusiasts do know about this game and how interesting it is.

The war is against the Seven Evil Archfiends. You lead your army by simply tapping the drum to control or regulate their actions.

The great thing about the Patapon 3 is that it has excellent graphics, and its control is more intuitive. You can play the game in multiplayer mode, adding a new dimension to the already perfect game.

The PS Vita is the latest handheld gaming console. It’s the successor of the popular PlayStation Portable (PSP). The PSVita is so portable, and you can even carry it in your pockets.

But that’s if you have big-size pockets. The primary role of the device is gaming, but you can also play movies, music and browse the website.

With the PS Vita, you can also connect to your social media accounts and keep in touch with friends and family.

To me, the handheld gaming consoles are just perfect. If not for smartphone gaming, they could have dominated the console market for years.

What Makes PS Vita The Best Portable Console Ever?

The PSP did hold the cards during its day, and that’s before PS Vita was introduced. The PSP and PS Vita have the same look, but other features make the PS Vita stand out. Let’s take a look at the great features.

The integration between PSP and PS3 had several limitations. But the PS Vita was designed to integrate and work with the PlayStation 4 perfectly.

If you own a PS4 and a PS Vita, you won’t have the worries of having to buy a controller. The PS Vita has great control buttons, and the analog stick is also ideally placed.

You can also save the game progress in your PlayStation Vita compatible memory card. You can then sync it with your PS4 to access the game from the PS4.

You should note that you cannot directly PS Vista game from a screen with having extra accessories.

2. It Has Dual Analog Sticks That Guarantee Smother Controls

Many people did complain about the lone analog stick on the PSP. It wasn’t easy to play certain games with only one analog stick. Sony decided to fix the issue with the PS Vita.

The PS Vita has two analog sticks that improve controls. Many games rely on the second stick to control the camera.

Sony added the second stick to the PS Vita, but it did improve the design of the stick. It has a smooth feel and great size, and this makes it so comfortable.

You can use it for hours without hurting your thumb. The design makes the PS Vita feel like a typical gaming control.

To take photos on your PSP, you must purchase an add-on. However, the PlayStation Vita has two inbuilt cameras (front and rear).

The cameras take pictures and allow you to play AR games (Augmented Reality) such as InviZimals.

Gaming is fun and has revolutionized: from the PSP, PS Vita, and now PS5. The PSP and PSV are the only Sony handheld consoles, but they did not live the glory.

The PS Vista is more powerful than the PSP in terms of features and capabilities. Therefore you can play certain PSP games from your PS Vita but the only downloaded ones. The PS Vita has no slots for the game cartridges of PSP.

Previous articleCan You Cast To Firestick? Having The Most Fun With Your TV
Next articleIs 32 GB Enough For iPad: All You Need to Know

Can You Cast To Firestick? Having The Most Fun With Your TV

Currently, most TV users are switching to streaming as their primary platform of entertainment. Because of this, manufacturers have now,...
Read

Star Wars is a movie that has had American and international movie fans staring at their TVs for decades now.  This...
Advertisment