Can I Plug My Fire Stick Into My Computer? Understanding The Technicalities 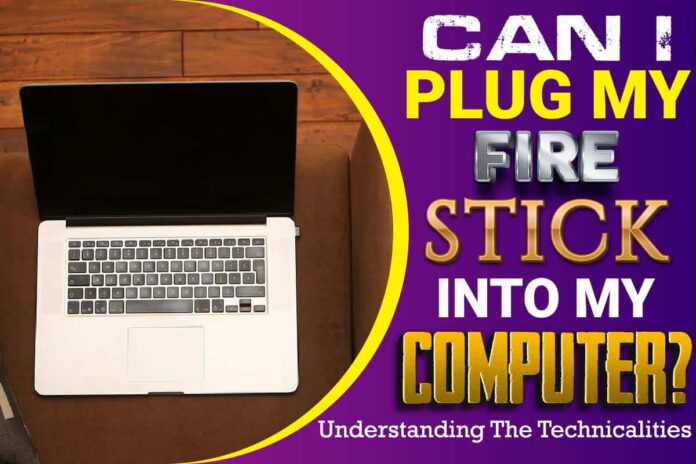 The Amazon fire stick is another great invention. It’s quickly gaining popularity and has already joined the ranks of home entertainment.

The device has brought a different feel when compared to other streaming technologies. You can plug the fire stick into the television through the HDMI.

You’ll have unlimited access to your games, saved movies, music, and many more with it. It’s certainly a simple device with many benefits.

The Amazon fire stick houses all your favorite content. The one lovable feature of the fire stick is it’s portable. You can carry it to every country, hotel, or park you visit.

Its popularity and ability to work on any TV with an HDMI port amazes. This has made many ask if it’s possible to use the fire stick to stream contents from the computer. So here is a detailed answer to the commonly asked question.

Can I plug My Fire Stick into My Computer?

Yes. You can connect the Amazon Fire stick to your computer using three methods. The methods are using the HDMI directly or by using the HDMI splitter. The first method does not work on many computers.

Before thinking about making the connection, check if your computer has an HDMI input, audio, and HDCP compliant. The three primary features are so essential.

More Explanation On The Answer

Many people who travel usually carry laptops with them. Or maybe you might be having a stationary computer at home.

Most gadgets and devices have been designed to either accept or output video. Unfortunately, they face lots of obstacles. Specific devices do have HDMI limitations.

The televisions and monitors do have HDMI in ports. This type of port allows video and other content to be imported into the device.

The fire stick and most laptops have the HDMI out port. Therefore, speaking, you cannot connect the fire stick with specific computers or laptops.

Alternatively, you can choose to do it the hard way and put in some extra work. We are living in a world of many possibilities.

The amazon fire stick connects to the TV using HDMI.  The HDMI is a common term and also a popular media transfer system.

It has replaced the optical cable and many more. All the latest devices come with an HDMI port. After connecting the fire stick to the TV, one can now stream favorite content to the screen.

The fire stick also has an HDMI out port and does mirror media on screen. The two gadgets can be described as having broadcast ports.

Because both are broadcast ports, they cannot send media and signals between the two. They are not configured to receive media through their HDMI ports.

Even if you try changing your laptop’s port to an HDMI in port, still it’ll not function.  It’s because the HDMI is connected to the graphic cards and not the in-built monitor.

No hardware path can facilitate the carriage of HDMI signals to the laptop screen. Therefore you cannot use the amazon stick on ordinary computers or laptops.

However, there are three proven ways you can use to go around this.

Use A Laptop With A HDMI-In Port

The bad thing is that most laptops do not have HDMI in port mode. If you are lucky to own one, then using the fire stick will be a no-brainer.

However, if your laptop doesn’t support HDMI in port, you’ll have to source for one. Particular laptops produced in the past have offered HDMI out ports in addition to HDMI in ports.

However, only a few models did produce such laptops. One of the models that came with both HDMI ports is the Allen wares m17× R4.

Before you think about getting one, you should note that the laptop was produced in 2012. This was nine years ago, a few months before the release of Windows 8.

In addition, it was a high-end gaming laptop and did come with a very dependable processor and GPU.

Use The Elgato HD605 And HDMI Splitter

The Elgato is a trendy gadget. It’s a capture card that can also be used on laptops. It comes with inbuilt software to ensure data reaches the laptop’s screen using the USB C port.

However, the Elgato needs a mighty computer like Windows with 64 bits or a MacBook running sierra.

The laptop should meet the following standards. It should be an i5 quad-core processor or more, have USB port three, etc. If it meets all these, you’re good to go.

The fire stick carries signals which are HDCP enabled. This is a type of security encryption protocol that protects digital data against piracy.

Unfortunately, Elgato does not work with HDCP. So here is where the HDMI splitter comes in. You’ll have to route the signal through the splitter to strip out that encryption.

However, the process is not that easy, and you’ll have to connect many power and HDMI cables.

How The Amazon Fire Stick Works?

It’s pretty easy to use the amazon fire stick. You plug the first stick into your TV, and you’re good to go. You can now access your favorite content like music, photos, games, and many more.

The amazon fire stick is interesting. It’s like walking with your television. When you want to travel, you unplug it from your TV and carry it from anywhere, even in your pockets.

When you reach your destination, you remove the device and plug it into any compatible TV. The great thing is almost all the modern TVs support the fire stick.

What Does One Get With The Fire Stick?

For the amazon prime members, it’s much better. The stick comes with your pre-registered account.

Being an amazon prime member also has its benefits. You’ll be able to choose from a cache of amazon originals. You’ll get access to content that is unavailable to the average user.

The package comes with everything you need to start enjoying your fire stick. The box has a fire stick, a USB cable, power adapter, two batteries, an HDMI extender, and a remote.

The Fire Stick And The Fire TV

It’s upon you to choose that one that fits your needs. For example, if you’re a traveler, the fire stick will be the best option for you. It’s because it is easily portable.

The fire stick and fire TV have some notable differences. Listed are some of the significant differences.

The fire stick is so small. It compares to the USB and is about 4 inches long. It plugs into your TV plus comes with an HDMI extension which makes things much more manageable.

On the contrary, the counterpart is a sleek square console. Each side of the console is about four and a half inches long.

The Fire TV wins on speed, and this also explains its rate. The RAM of the fire stick is 1GB. The Fire TV comes with 2GB of RAM, making it better and faster.

So if you’re a serious or professional gamer, the Fire TV is the right choice for you to avoid lags.

The Fire TV has better features hence better capabilities. The great thing is that it can support resolutions of up to 1080p and is enabled for 4k streaming.

However, when it comes to portability and pricing, the Fire TV is not the best option. Also, if you are looking for something that can help you stream, go for the fire stick. It’s more budget-friendly.

Connecting the fire stick to your computer or laptop can be a tricky task. You’ll go through a lot of trouble watching movies from your computer.

Plus, you’ll have to spend some extra bucks to buy some gadgets. However, there are some better options through which you can entertain yourself using the computer.

Most of the apps and programs that the fire stick uses are accessible through your browser.  This makes it easier for you to stream into amazon, Hulu, or Netflix.

Previous articleWhy Does Ubisoft Downgrade? Here Is What You Need To Know
Next articleWhere Is Manage Content And Devices On Kindle Fire? The Ultimate Guide Of Using Kindle